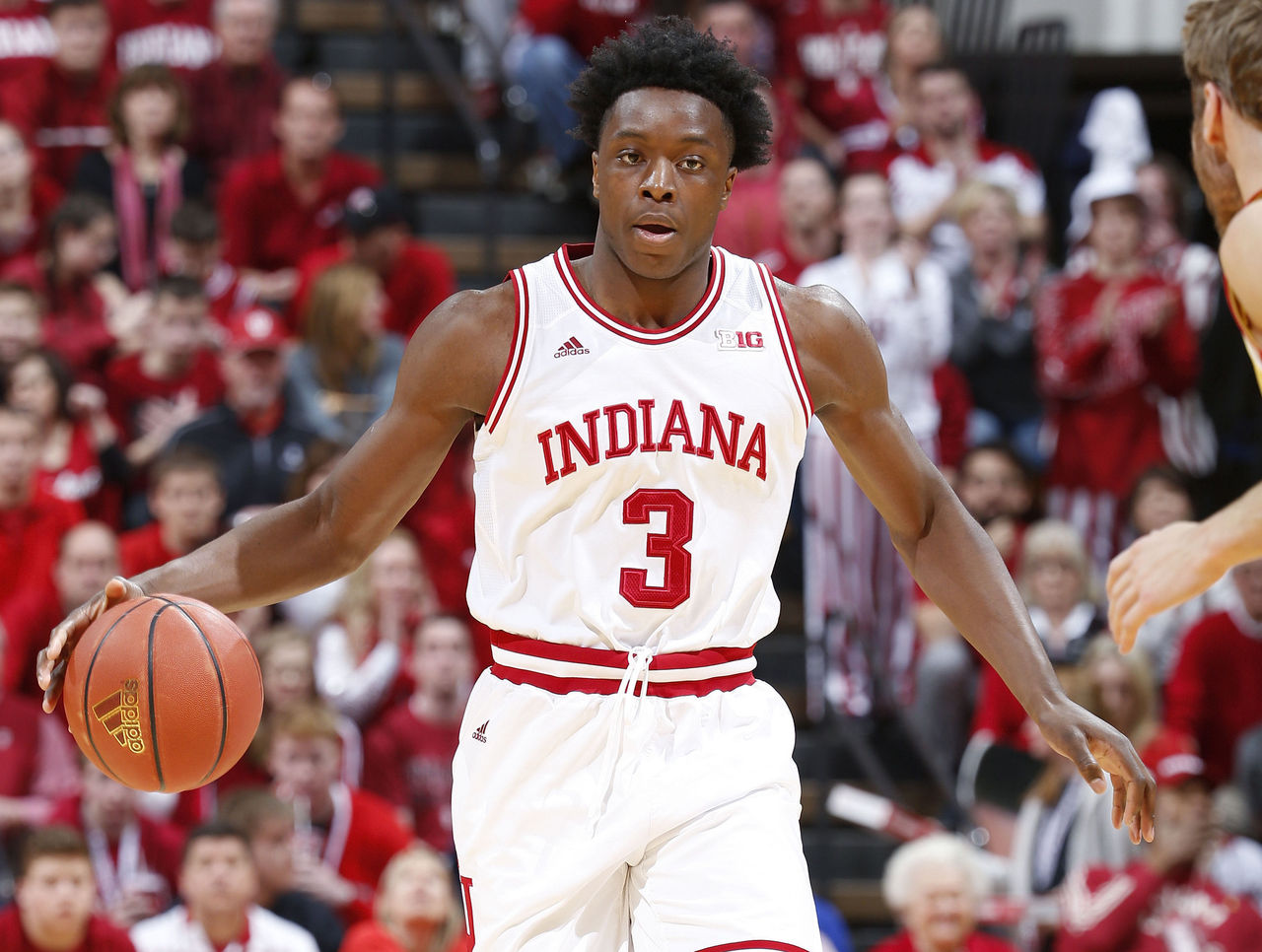 This kid has a knack for being undervalued. Born in London and raised in Missouri, Anunoby was scouted very little by a lot of programs except for one: Indiana University. From there, he added athleticism and a rare veteran presence from a Freshman that helped Indiana make it very deep in the tournament. Granted, it wasn’t only him that got the team as far as they did (as we will see in the coming days, wink wink), but he was a contributing factor. With the potential to be a SF and possibly a decent wing, it would be insane to not look at OG. However, I am a big Hoosier fan, but that’s not going to skew my view of him.

Springs – OG has one thing that a lot of forwards and wings in this draft don’t have: hops. If you look at his tape, OG has a lot of leg power and uses all of it when jumping up for a potential block, steal or dunk. In fact, you can look at some highlight tapes of his, and you can tell that he sometimes doesn’t use all of it to do 360s off the baseline. Also, back in camps before he was at Indiana, he could be seen beating big men off tips because of how high he can jump. He’s an insane physical prospect.

Per 40 minute Monster – It’s no secret that OG didn’t really produce at all last year. Scoring 5 PPG, 4 RPG, 0.8 SPG, 0.8 BPG, he doesn’t necessarily jump off the paper as someone who could be a steal in the draft. Take into account he could do even better this year, though, and you get what I mean. But, take that away, and let’s look at Per 40 numbers. I looked around and did a couple calculations myself and got around the same numbers as they did, and Per 40 minutes, OG Anunoby averages 14.7 PPG, 7.2 RPG, 3.0 APG, 2.2 SPG, 2.2 BPG. That’s a ridiculous stat line when you consider he played just about 10 minutes in 2/3rds of the games played last year.

Shooting presence – Without Per 40 numbers, OG averaged around 44.8% shooting from 3PT range at the collegiate level. You might be thinking, “Oh, but that’s because he didn’t get a lot of time on the court, so he barely shot 3’s.” Well, according to Sports Reference, which is the Bible for Basketball statistics, OG put up about 1 three-pointer per game. Adjusted for Per 40, that goes up to 3. That’s comfortable levels of 3PT percentage coming from someone who is better at slashing. Yes, I said slashing. He is a big body, considering he’s 215lbs, and uses it, combined with NBA style layups, to get around the basket. His favorite and most polished seems to be his euro, and boy is it devastating.

Dribbling – There is a reason OG has been spotted in LA at Adidas Nations. He is currently working on the fundamentals, which includes footwork, shooting, and most importantly, dribbling. I knock on him a lot for this because, even in his highlights, you can tell something is up with it. Off of breakaways, OG is, how you say, hesitant to handle the ball. He arches his back, two hand dribbles the ball a few times, and never takes his eyes off of it. Now, you might think this is a little thing, but it could mean a lot. If he’s too focused on the ball, he could just as easily turn it over, which, with Per 40 numbers, he might do a lot (about 3-4 times per game. Yikes…)

Defense – Defense is key when you talk about the higher level game of the NBA. Yes, you see players with great offensive prowess take breathers on defense, but OG is (A) not in the NBA yet, (B) not a superstar in the offensive field, and (C) going to be going up against some stiff Big 10 competition this year. He shows glimpses of defensive fortitude when he anticipates a pass or goes for a block, but he doesn’t do it on a consistent level yet.

Draft Stock: He can hop around late 1st round to early 2nd round, but depending on how he does this season, he has potential to be a top 5 pick easily.

The Toronto Raptors Are Finally For Real